Four approaches to keeping water out of the basement 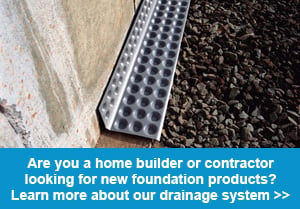 Foundation waterproofing is the process of preventing water intrusion, from subtle water seepage to flooding when the ground is over-saturated. There are several approaches and products for waterproofing a foundation and strong proponents of one method over another. Like many home repair jobs, foundation water problems typically can't be solved with a single product or treatment.

As experts in waterproofing and moisture control, Basement Systems' contractors specialize in designing waterproofing systems to fit the individual needs of a home.

Contact us to schedule a free evaluation and estimate.

Dampproofing is often mistakenly referred to as a foundation waterproofing method. When a home is being built, a waterproof coating is often applied to the foundation to keep out soil moisture. This approach does not prevent water from entering the basement through gaps, cracks, and holes during construction. Effective basement waterproofing should keep out both moisture and water.

Dampproofing is a coating that's usually asphalt-based and is either sprayed on or brushed on to the outside of the foundation walls. In many states, building codes require dampproofing. Waterproof coatings have several drawbacks, including an inability to seal large cracks or holes and the risk for damage caused by backfill that's coarse or improperly installed. 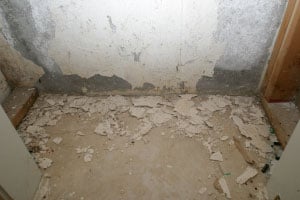 Moisture seepage through a foundation wall can destroy the bond between the waterproofing paint and the concrete.

Applying waterproofing paint to the inside of your basement walls won't stop water seepage through cracks or porous concrete. Bubbles can eventually form under the paint and cause it to peel off the wall. The paint can also trap condensation inside the foundation wall, contributing to bigger, more expensive problems.

Waterproofing paint is often regarded as a cosmetic fix and doesn't work at all if the source of the water problem isn't addressed. 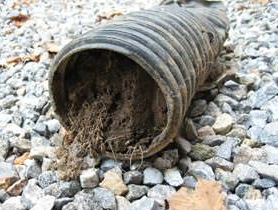 Plastic drain pipes installed around the exterior of a foundation often clog with dirt and plant roots.

Exterior foundation waterproofing involves digging down to the foundation footer to install or replace drainage pipes, commonly known as a French drain system. Sometimes a waterproof membrane is applied to the outside of the foundation wall to prevent water infiltration.

Exterior foundation waterproofing is more expensive than other methods due to the excavation. Another downside is the disruption to landscaping, porches and driveways. French drains can also be crushed during the backfill process and often clog with silt and plant roots, even when installed correctly. 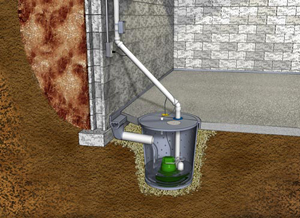 The most popular way to keep a basement dry is to capture and remove water with a perimeter drain and sump pump system.

A system designed around interior drainage is the least disruptive method of foundation waterproofing. An interior waterproofing system effectively addresses the forces of hydrostatic pressure, which is the pressure of groundwater forcing its way through the basement walls.

The interior perimeter of the concrete floor is jackhammered and drainage piping is installed, routing water that enters the basement to a sump pump system that actively removes the water. A backup battery-operated sump pump is often recommended to prevent flooding of the basement during a power outage.

Basement Systems' WaterGuard® drainage pipe is a clog-free interior waterproofing system that captures groundwater before it gets to the basement floor and routes it to a sump pump.

Find the right foundation waterproofing solution for you

Contact Basement Systems to schedule a foundation waterproofing consultation with your local contractor and get a personalized cost estimate on the best solution for your home.